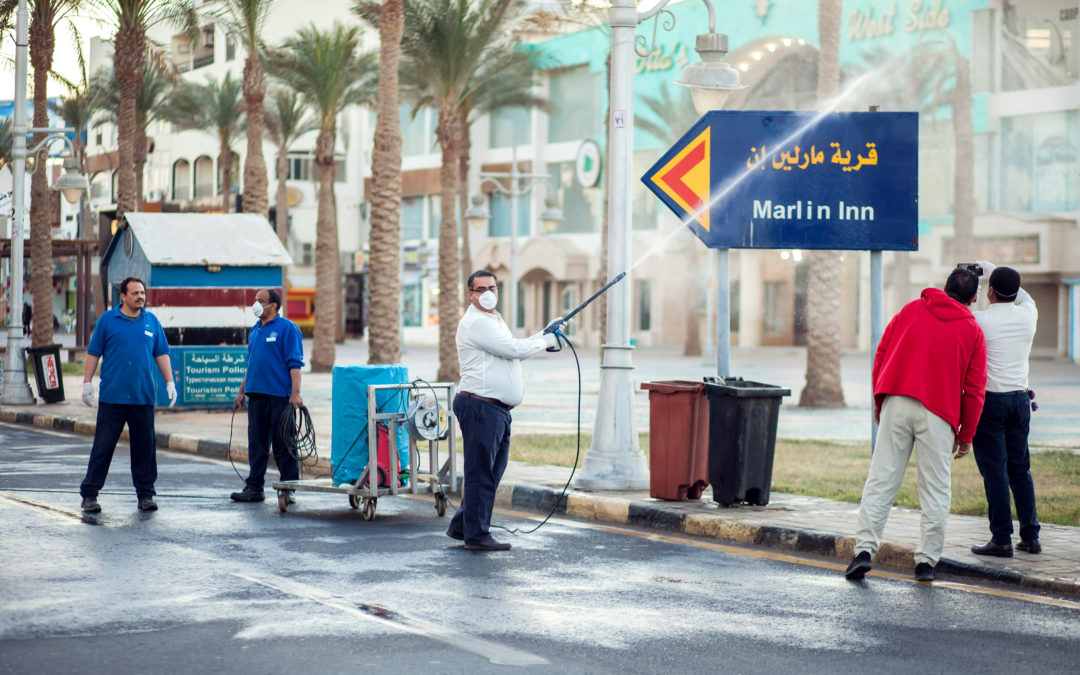 Egypt/Tourism – “Egypt’s Minister of Planning Hala El-Said said on Monday that tourism revenues in the current fiscal year (2019/2020) are expected to reach about $11 billion instead of the $16 billion expected before the outbreak of the coronavirus. The minister did note, however, that a degree of growth rate recovery is expected by the second half of the upcoming fiscal year,” Ahram Online reports.

Oil Prices – “The minimal impact on oil prices from a global deal for record output cuts showed that oil producers have a mountain to climb if they are to restore market balance as the coronavirus shreds demand and sends stockpiles soaring, industry watchers said. After several days of deliberation, the Organization of the Petroleum Exporting Countries (OPEC) and allies led by Russia hammered out an agreement to cut output by 9.7 million barrels per day in May and June, equal to nearly 10% of global supply. Other major producers like the United States and Canada gave indirect commitments to cuts as well, playing up forecasts for drastic production declines in coming months due to the free-fall in prices,” Reuters reports.

Saudi Arabia/Ports – “The Saudi Ports Authority (Mawani) said on Monday it had signed an agreement worth more than $1.9 billion with Saudi Global Ports (SGP) to build and operate container terminals at a port in Dammam. SGP will build, operate and transfer the container terminals on a 30-year contract. The project will increase the capacity at King Abdul Aziz Port in Dammam by more than 120 percent to reach 7.5 million containers and add more than 4,000 jobs in the ports and logistical sectors, the Saudi Minister of Transport Saleh Al-Jasser said,” Arab News reports.

Saudi Arabia –  “Saudi Arabia’s oil revenue could decline by 145 billion Saudi riyals based on an oil price of $40 per barrel for the benchmark WTI crude, said Al Rajhi Capital in a report Monday. After multiple rounds of meetings, OPEC+ and other oil producing nations decided to cut oil production by record levels to help balance oil market. As per the decision, around 9.7 million barrels per day (bpd) will be cut, starting from 1 May 2020 for two months. Thereafter, from July to December 2020, the cut will taper to approximately 7.6 million bpd. From January 2021 to April 2022 the cut would be approximately 5.6 million bpd,” Zawya reports.

MENA Oil Consumption – “The Middle East’s consumption of oil products from gasoline to jet fuel will add to pressures on global oil demand for this year as countries led by the energy-dependent Gulf region face economic slowdown, extended lockdowns and an oil price crash that will slam budgets already constrained by the coronavirus pandemic. Demand for oil products in the region will drop by a record 2.9% this year, with jet fuel/kerosene consumption plunging 15% and gasoline use falling by almost 6%, according to latest estimates from S&P Global Platts Analytics. The region covering 14 countries including Saudi Arabia, Bahrain, the UAE and Iran had contributed to global oil demand growth in 27 of the past 29 years. This year, global oil demand is set to contract for the first time in 11 years,” S&P Global Platt’s reports.

UAE/NMC – “NMC Health, which has been placed under a UK court-appointed administration, announced on Monday the formation of a new board of directors that has been entrusted with the immediate priority of implementing corporate governance changes in the group.
Richard Fleming, Mark Firmin and Ben Cairns of Alvarez & Marsal Europe, the joint administrators, have appointed four new non-executive directors with broad international restructuring experience to provide more robust governance and oversee the work with the management teams in the individual NMC businesses,” Khaleej Times reports.

Iran/Covid-19 – “President Hassan Rouhani said the ban on inter-province travels placed to curb coronavirus transmission will be lifted on April 20, as Iran’s daily infection tally declines. During the meeting of the coronavirus taskforce chaired by Rouhani on Sunday, the president announced that restrictions on road trips across Iran’s 31 provinces will be removed starting next Monday, President.ir reported,” Financial Tribune reports.

Saudi/Asia Spot Price – “Saudi Arabia’s state oil giant Aramco has set the May price for its Arab light crude oil to Asia at a discount of $7.3 to the Oman/Dubai average, down $4.2 a barrel from April, according to a document seen by Reuters on Monday,” Reuters/Al-Arabiya reports.

Libya/OPEC – “OPEC is to exempt Libya from a plan to slow down oil production for a period of two months, starting next May, due to the production lost through the closure of ports and fields by pro-Haftar militias east of Libya,” Libya Observer reports.

Iraq/Electricity – “The Iraqi government on Sunday announced it was taking ‘measures’ regarding national electricity production in preparation for increased demand in the summer months ahead. Over 16 years after the fall of the Saddam Hussein-led regime, the Iraqi government is yet to address low electricity supply in the country. Baghdad meets a part of its demand by purchasing resources it needs to supply its power plants from its neighbors like Iran,” Kurdistan24 reports.

Algeria – Algeria faces economic and social turmoil if crude prices continue to collapse, experts have warned, with the oil-dependent country reeling from a year of popular protests, political turmoil and now, coronavirus. The North African country is an example of how hydrocarbon economies are likely to face unrest if oil prices remain at near two-decade lows due to the COVID-19 pandemic and a price war between key players Saudi Arabia and Russia,” AFP/Gulf News reports.