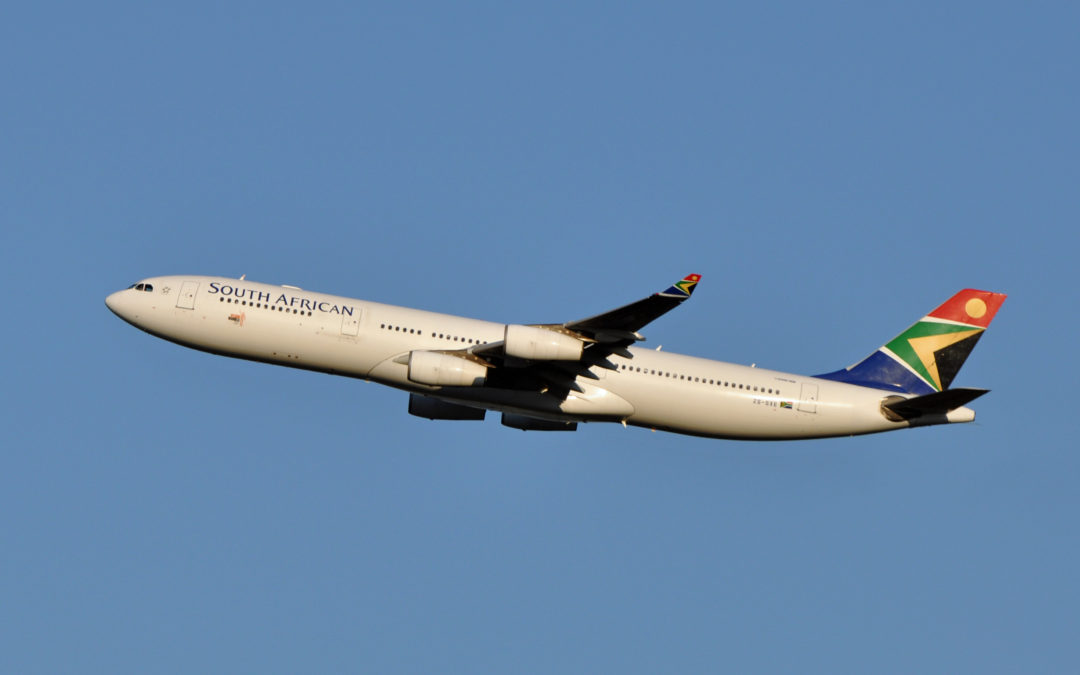 East Africa – “All five East African Community countries should brace for drastic drops in their economic growth rates this year as a direct result of the global coronavirus crisis. The International Monetary Fund’s latest World Economic Outlook projections for 2020 pegs Kenya and Tanzania’s respective GDP growth rates at one per cent and two per cent respectively in 2020, down from 5.6 and 6.3 per cent respectively in 2019. Uganda will maintain a 3.5 growth rate this year, compared with 4.9 per cent in 2019,” The East African reports.

South African Airways – “South African Airways (SAA) is set to lay off all of its employees at the end of April. A document detailing the airline’s severance package, obtained by Bloomberg, shows  that 4,700 employees will leave the company by the end of this month. The collapsing airline will reportedly make sales of its assets to foot the salary pay-outs,” Bloomberg/The Standard reports.

Virgin Australia – “Virgin Australia Holdings owes A$6.90 billion (S$6.24 billion) to more than 10,000 creditors based on an initial review and will seek a three-month payment waiver from aircraft lessors, according to the company’s administrators,” Reuters/Singapore Straits Times.

India/Aviation – “Airlines in India are likely to suffer a revenue loss of 11.2 billion dollars this year leading to 2.9 million jobs at risk as passenger demand falls by 47 per cent due to COVID-19 crisis, the International Air Transport Association (IATA) said on Friday. The latest estimates from IATA indicate a worsening of the country impact from coronavirus pandemic and travel restrictions in the Asia Pacific region,” Business Standard reports.

Facebook/Reliance – “With the pandemic battering assets and oil nosediving, Indian tycoon Mukesh Ambani needed a win to stem the investor exodus from Reliance Industries Ltd., the energy conglomerate he’s been trying to reinvent. This week, Facebook Inc. and its Chief Executive Officer Mark Zuckerberg delivered just that. The U.S. social-media giant said it will buy about 10% of Reliance’s digital assets for $5.7 billion — its biggest purchase since acquiring WhatsApp six years ago,” Bloomberg/Economic Times reports.

UAE/DP World – “DP World, the Dubai-based ports and logistics giant, said the real impact of Covid-19 will be seen from the second quarter onwards after it posted a 1.7 per cent dip in first-quarter shipping container volumes. The ports operator warned that global trade and container volumes are forecast by industry analysts to decline in 2020, with estimates on the scale of the drop ranging from 3 per cent to 10 per cent, it said in a statement on Thursday,” The National reports.

Etihad/Air Arabia – “Air Arabia Abu Dhabi, the new joint venture between Etihad Airways and Air Arabia, secured its air operating licence, making it the UAE’s fifth national airline once it begins service from the capital. The new discount carrier, which was expected to start operations in the second quarter of 2020, is working with the UAE’s civil aviation regulator to finalise its launch date once market conditions improve and skies re-open, it said in a statement on Thursday,” The National reports.

Kenya/Ports – “Importers in the region have called on the Kenya Ports Authority (KPA) and the Kenya Ship Agents Association to increase the free demurrage quota and free cargo period as a result of slow clearance and transportation of goods due to lockdowns and curfews imposed by various countries,” The East African reports.

Pakistan/ADB – “The Asian Development Bank (ADB) has pledged to provide $1.7 billion to Pakistan to combat the economic impacts of coronavirus in the country, it was learned on Friday. The assurance was given by the ADB President to the Minister for Economic Affairs Khusro Bakhtiar, during a virtual meeting,” Business Recorder reports.

Pakistan/Moody’s – “The financial support from the International Monetary Fund (IMF) and other multilaterals has lowered Pakistan’s financing risks from the coronavirus-related economic shock even though its fiscal deficit may touch double digits. ‘The substantial financial support from official-sector creditors reduces Pakistan’s financing risks,’ said the Moody’s investors service on Thursday, adding that the fiscal stimulus announced by the government could widen the country’s budget deficit to 9.5-10 per cent of GDP,” Dawn reports.

Bangladesh/Port – “State Minister for Shipping Khalid Mahmud Chowdhury said the government is pledged-bound to keep the operational activities of Chitagong port in the normal pace for national interest. Khalid Mahmud told this journalists after a view-exchanging meeting with senior officials of Chattogram Port at the port building on Thursday, reports BSS,” Dhaka Tribune reports.

Sri Lanka/Fitch – “The shock to Sri Lanka’s economy from the coronavirus pandemic will exacerbate already-rising public and external debt sustainability challenges following tax cuts and an associated shift in fiscal policy late last year. The pandemic will especially hurt the tourism sector, which, combined with weaker domestic demand, will further damage Sri Lanka’s public and external finance metrics,” Lanka Business Online reports.
Yemen/Flood – “Flash floods caused by heavy rains have hit Yemen’s interim capital, Aden, leading to a power outage and city-wide immobilization. Eight people, including five children, have been killed and dozens injured, officials said. The deaths take the national toll to at least 15 after the United Nations said that seven other people were killed by flooding in the north, where the country’s long conflict is raging between the government and the Iran-backed Houthi militias,” Asharq Al-Awsat reports.
Malaysia Airways/Air Asia – “Merging money-losing state carrier Malaysia Airlines Bhd with budget airline AirAsia Group Bhd is one of the options to ‘save’ them as the Covid-19 crisis batters the industry, Malaysia’s second-most senior minister Datuk Seri Mohamed Azmin Ali told Reuters on Friday,” Reuters/Edge Markets Malaysia reports.
Singapore Airlines – “Covid-19’s grounding of airlines worldwide has ensured that only the fittest and best-supported fliers will survive. With rich government backing, Singapore Airlines Group (SIA) is well-positioned to ride out the turbulence and boost its post-pandemic global market share. Singapore is now estimated to have the world’s largest number of idle aircraft after global travel restrictions forced SIA to ground 96% of its approximately 200-plane fleet on March 23. With infections sharply rising in the city-state and elsewhere, it is unclear when normal operations will resume,” Asia Times reports.
Lion Air – “Thai Lion Air is reducing its workforce again amid the freezing of its business due to the coronavirus outbreak in the country. The airline informed its staff in a statement last week that almost 120 employees with less than a year’s experience would be let go on the understanding that they would be the first priority for recruitment in the future if business returns to normal,” Bangkok Post reports.

Mozambique/Militants – “Some 52 young people were shot dead or beheaded in the country’s north as an Islamist insurgency gains strength. Local and national security services as well as foreign mercenaries have been unable to stop the militants,” AllAfrica.com reports.

Seychelles/Covid-19 – “The Seychelles Health Authority said on Thursday that it is maintaining the extension of the prohibition of outdoor movement until May 4, four days longer than the April 30 date previously announced. Public Health Commissioner Jude Gedeon said during a weekly press conference that the additional days will ensure more time for active surveillance and monitoring,” Seychelles News Agency reports.

Geo-Strategy – “If Chinese military planners thought they could use the Covid-19 crisis to steal a march in the Indian Ocean, they may have been mistaken. India may be under the world’s largest coronavirus lockdown, but its navy is not. On April 14, the Indian Navy issued a public statement saying that its Eastern Naval Command’s Dornier squadron continues its maritime surveillance missions and that its naval assets remain ‘mission-ready and prepared for immediate deployment should the need arise,'” Asia Times reports.

India/Geo-Politics – “Amid this entire crisis, India has been playing an important role. India’s role could be considered at both the domestic level – the steps taken to tackle the crisis at home — and the diplomatic level — India’s assistance to other countries, especially in the Indian Ocean Region (IOR), amid the pandemic…One of the first steps taken by India was to evacuate citizens of different countries along with its own citizens from Wuhan, China, the epicenter of the first COVID-19 outbreak. Those evacuated as compassionate cases included citizens from Indian Ocean Rim countries such as Bangladesh, Myanmar, the Maldives, South Africa, and Madagascar. India not only evacuated these people, but also quarantined them in India as a precautionary measure before sending them to their respective countries.” The Diplomat reports.

India/Covid-19 – While death rates in some countries have risen sharply in recent weeks, in India the opposite seems to be happening, at least in some places, leaving hospitals, funeral parlours and cremation sites wondering what is going on. ‘It’s very surprising for us,’ said Shruthi Reddy, chief executive officer of Anthyesti Funeral Services, which operates in of Kolkata and Bengaluru,” LiveMint India reports.

Sri Lanka/India – Sri Lanka is set to enter into an agreement with the Reserve for a currency swap worth moe than $400 million to boost foreign reserves and ensure financial stability of the country which is badly hit by the Covid-19 pandemic, The Times of India reports.

Maldives/IMF – “The International Monetary Fund (IMF) has approved a disbursement of 28.9 million US dollars to the Maldives as the number of COVID-19 cases in the country continued to rise, local media reported. The Executive Board of the IMF approved the disbursement on Thursday under the Rapid Credit Facility (RCF), which the government can use to manage fiscal needs and balance of payments amid a worsening COVID-19 outbreak, reports Xinhua,” Financial Express reports.